In the November issue of the Fire and Risk Management Journal, Peter Davies argues that social media could be of benefit to both emergency response and public compliance in the current pandemic. He sheds light on technological solutions, including a case study on PublicSonar.

Peter Davies is a seasoned expert in UK public security and policing, with former roles at chief officer and director level. Currently, Peter works with the UK non-profit organisation Get Safe Online to promote online safety globally. Via his consultancy practice, he provides others with strategic advice and support related to his expertise and experience.

You can find an excerpt as well as the full article below.

In the midst of the extraordinary events and responses triggered by the COVID-19 pandemic, there has probably never been a greater value placed by emergency responders on public feedback. This goes well beyond conventional, relatively familiar issues of reputation management and ensuring that services are delivered with the consent and support of the public, important though these are.

At a time when it has never been so important to be able to communicate and listen effectively and actively, responders are looking to upgrade the quality, frequency and accuracy of their listening systems.The term ‘community intelligence’ may be familiar to those with a policing background. Community intelligence has helped manage many critical incidents, reducing tensions and enabling officers to deal sensitively and thoughtfully with issues that might easily have aggravated rather than soothed situations – allowing them to do their job and speed up the return to normality.

Among the new or repurposed capabilities to hand, technology and its adaptation by the public can perhaps come to the rescue. Consider these facts: two thirds of the UK’s population are users of social media and the vast majority of these use social media when they are mobile.

In the context of the new requirement to be able to listen to people and engage with them, this article is not about the benefits or the risks, but rather the opportunity.

It now seems strange that we would not be tuning in to the very channels of open public communication, where the majority of the public we serve are already to be found.The pandemic may make the most persuasive case, but any effort towards critical incident identification and response through effective access to published social media content must surely become not only the norm, but also an assumed element of any emergency service’s approach to responsiveness.

The emergency services and resilience partnerships are increasingly acquiring the understanding to make good use of this kind of capability. Based on my experience, what may still look to some like a novelty only to be embraced by outliers and those with a high appetite for risk will evolve into normalcy to the extent that not having that technology will be remarkable. 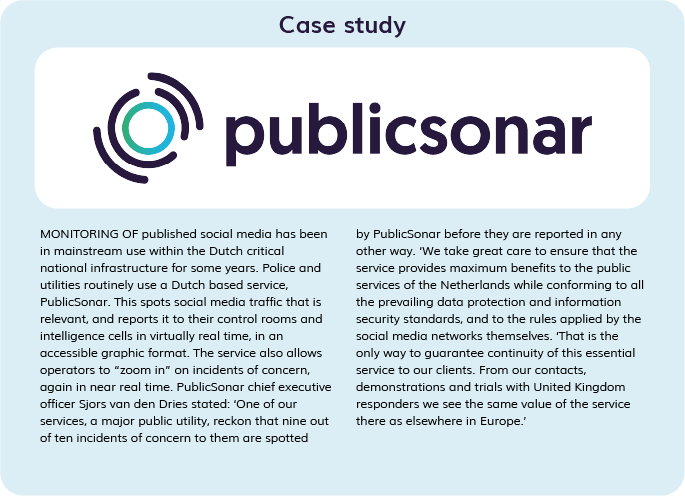 I have seen this evolutionary curve before and we are at a certain point on the same curve now in relation to mainstreaming the capability to listen to people through their social media outputs. Such a service must respect privacy by law, and in addition the social networks themselves have surprisingly rigorous restrictions on the use of their data.

In my view, the ability to understand what the public is thinking, saying and doing has never before been such a vital element in the real time management of critical incident response.

The pandemic may be the single factor that brings this issue to the fore, but social media traffic enables emergencies of all kinds to be detected, triaged and responded to more quickly and effectively. I look forward to the next stage in the evolution of these services, and to the public safety advantages it will bring. 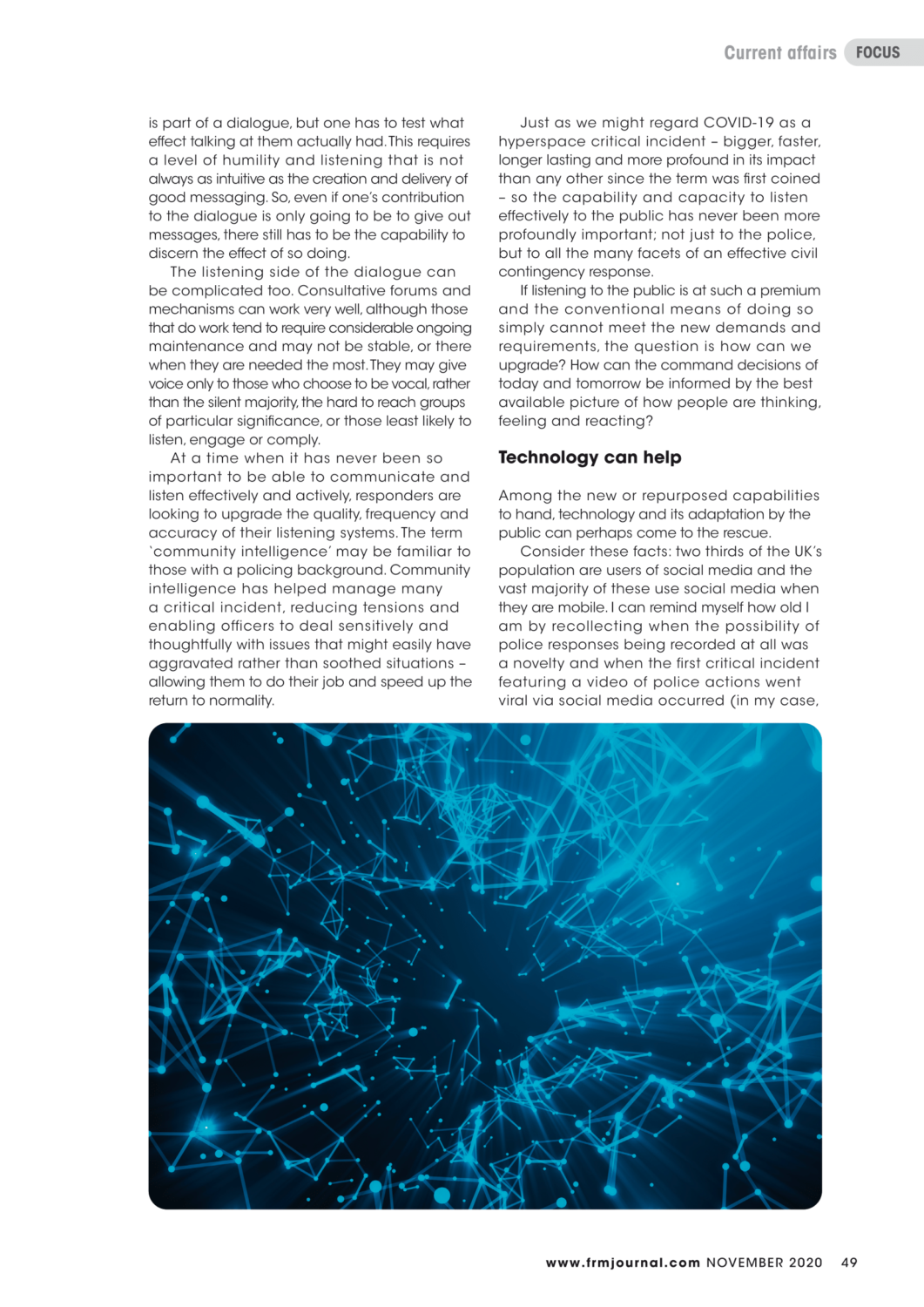 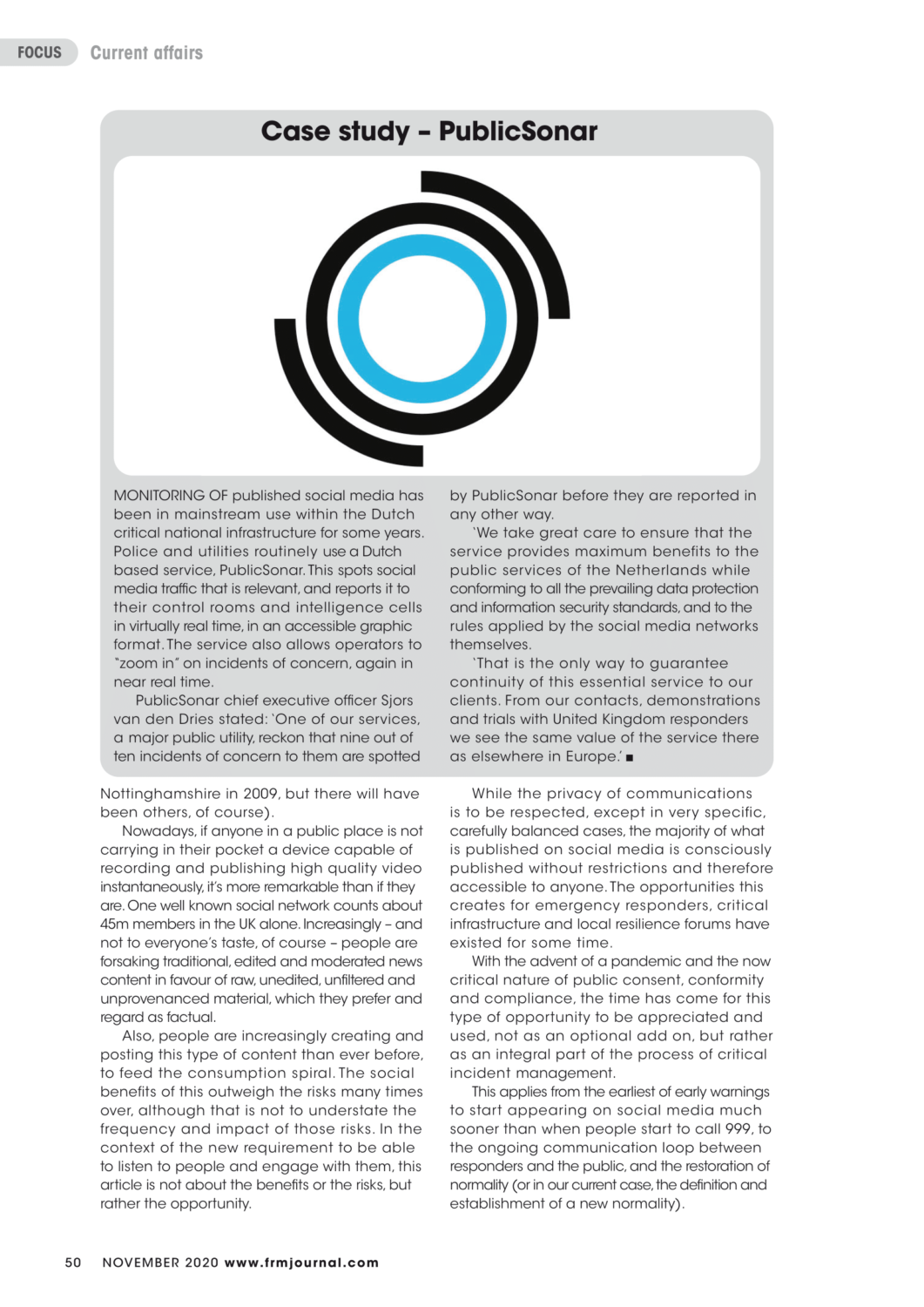 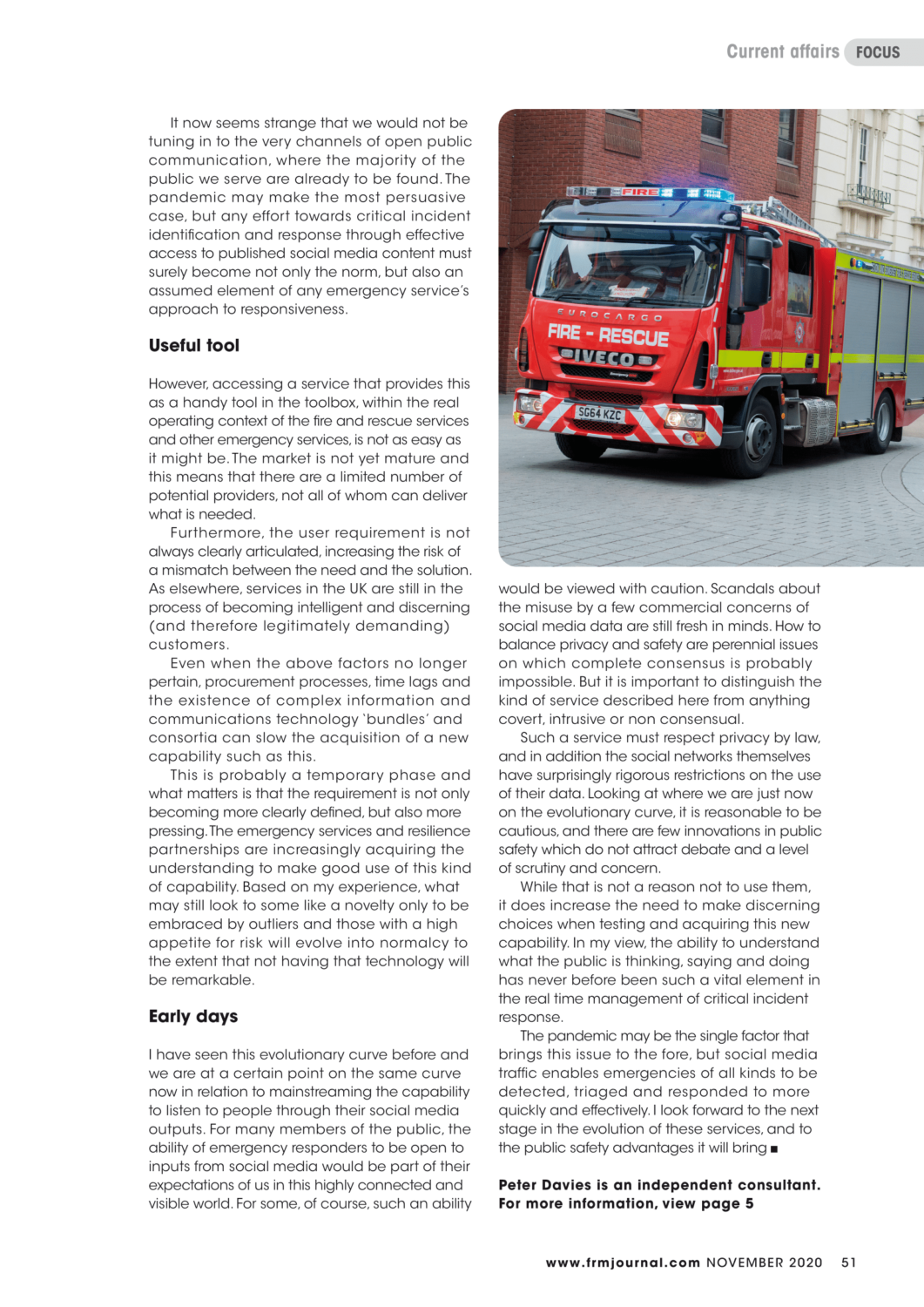