During incidents: are citizens angry or confused? Valuable information is needed to enhance public safety and security. Read more about how public sentiment can inform your decision-making. 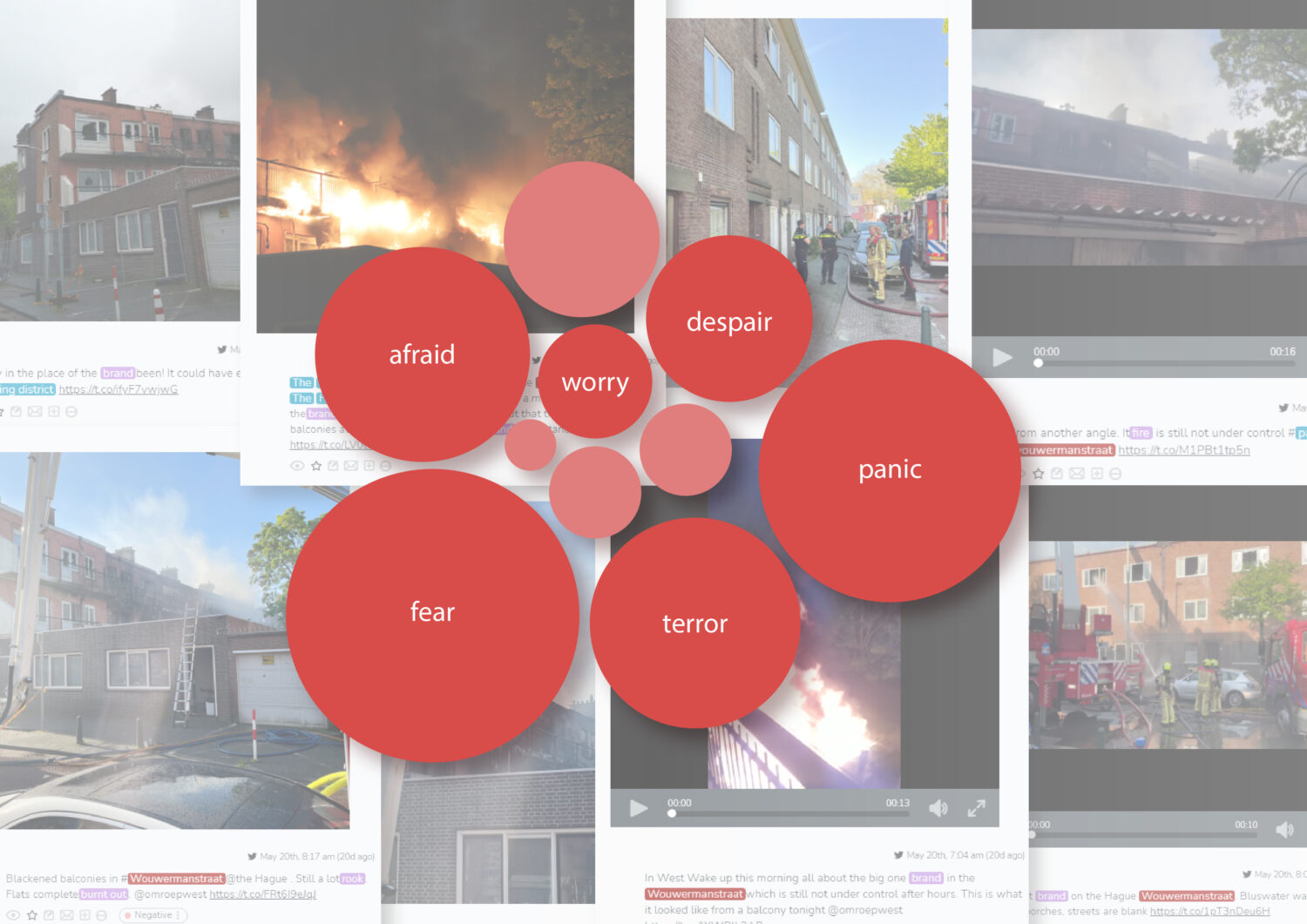 During incidents, emergencies, disasters, crises and high-risk events, it is important to be aware of the feelings, sentiment and risk perceptions of citizens. Simply knowing that sentiment is “negative” is not enough. Are people angry? Confused? Or fearful? For public authorities, understanding which sub-sentiment is dominant gives insights into what response is needed. From (online) information to physical safety instruments to emergency response. In this blog, we take a closer look at sentiment analysis and present and touch upon some examples.

But let’s first start with the definitions. According to the Oxford dictionary sentiment is defined as a view or opinion that is held or shared by an individual. Sentiment analysis determines the emotion that is expressed with a certain view or opinion. It facilitates gauging public opinion and understanding the feelings of individuals. Sentiment is usually categorised into positive, negative and neutral. Determining the public sentiment at any given point provides valuable insights that can serve as input for actionable decisions for public safety & security.

People online share millions of messages per hour. Many of them contain various emotions. Research shows that information posted online during incidents and crises is extremely valuable for safeguarding public safety & security. Based on the public emotions and feelings, responders can determine the sentiment. This provides an additional source of information for decision-making. For instance, if there is a devastating fire in an occupied urban area when citizens post messages of fear, emergency services can act accordingly.

Whereas for marketing purposes, sentiment analysis might primarily be categorised into positive, negative and neutral. In order to truly understand the public emotions concerning public safety & security, it is important to dive deeper into the feelings of positivity and negativity. On one hand, it is important to measure the sentiment score. This means estimating how many messages from the total amount of messages a topic is positive or negative. The resulting percentage gives you an indication of how the public feels. On the other hand, emotions can be subcategorised in order to get a more in-depth sentiment analysis. For example, emotions such as sadness, fear, anger, confusion and hate fall under the sub-category of negative sentiment.

Once the sub-sentiment is established, it is valuable to dive into the messages. Hypothetically, if the prevalent sentiment is mentioning fear, you want public messages to be monitored to create a more detailed situational awareness. Determine the emergency response based on whether people worry about a fire spreading to other buildings? Or if the main worry is about people in need, panic in the crowd or other externalities such as smoke and debris spreading.

Manually analysing the billions of messages posted daily is not only tedious, but also an infeasible task. More so during an emergency circumstance affecting citizen safety. That is why we at PublicSonar developed an automatic sentiment analysis specifically for public safety & security. Our smart algorithms collect real time situational and location data from a variety of sources. Then, artificial intelligence automatically processes these into a sentiment score and sub-sentiments. Focused on your operational needs. This brings a sophisticated, yet easy-to-use and precise, sentiment analysis at the fingertips of public authorities. This technological innovation serves for ensuring public safety during a multitude of events and crises.

Case 1: Sentiment during The Hague blast

A few weeks ago, a massive fire raged in a residential area in The Hague. It left over 40 households homeless and demolished the local mosque. During this devastating emergency, PublicSonar was used to create a situational picture. Live footage and messages were posted from the scene. Public sentiment was automatically detected. The main feeling was one of anger. This included indignation at the poor living conditions of the residents and anger towards landlords and employment agencies, who housed numerous labour migrants under poor conditions. 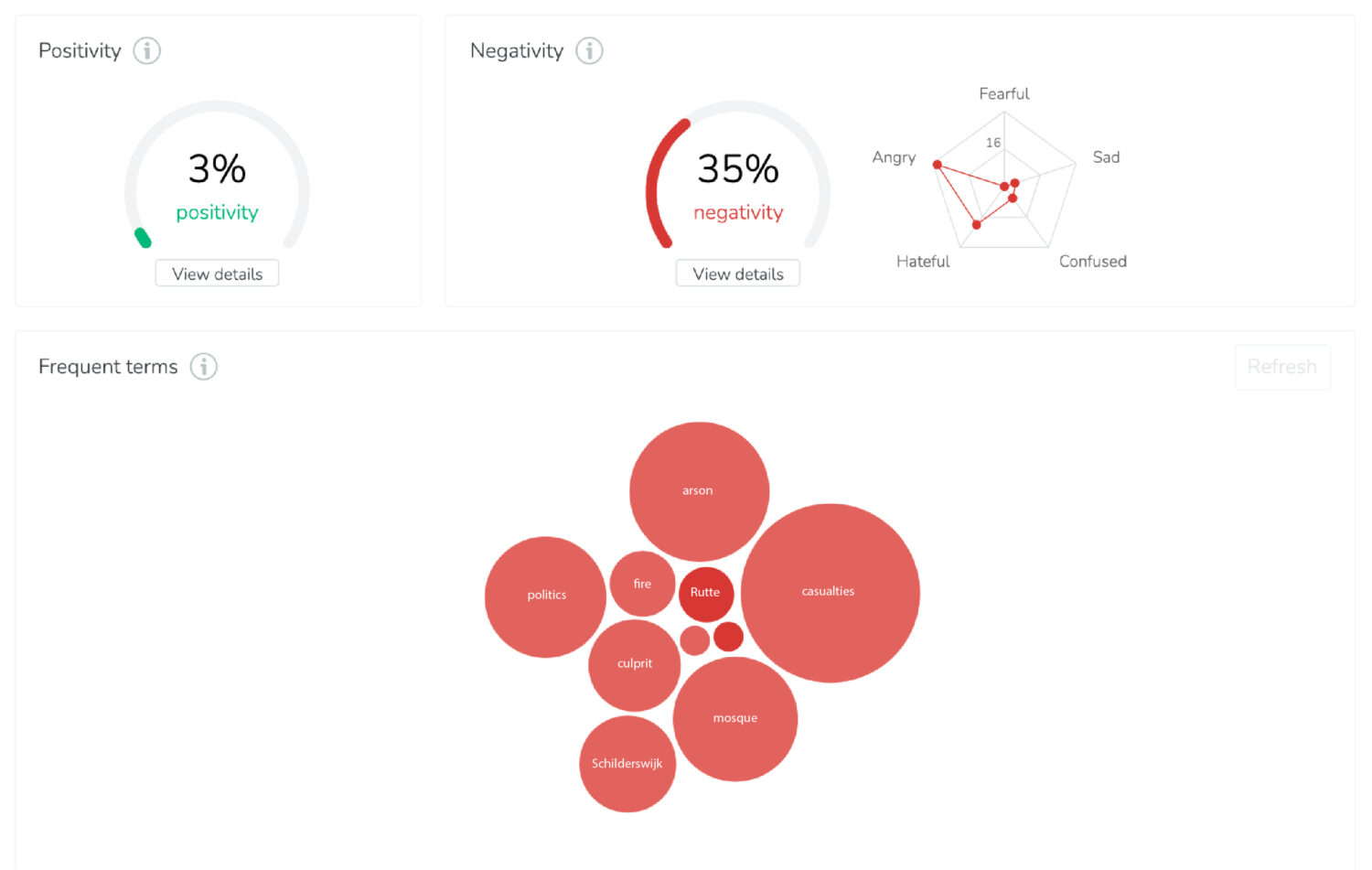 Currently, one of the most sensitive topics internationally is that of the Covid-19 vaccinations. Citizens are having countless online discussions about whether or not to vaccinate.  Misconceptions about the medication are spreading incredibly fast. PublicSonar makes it possible to detect public sentiment about the vaccines and the measures adopted by authorities nationally and internationally. This information is valuable for determining the necessary communication and measures to be adopted by authorities. 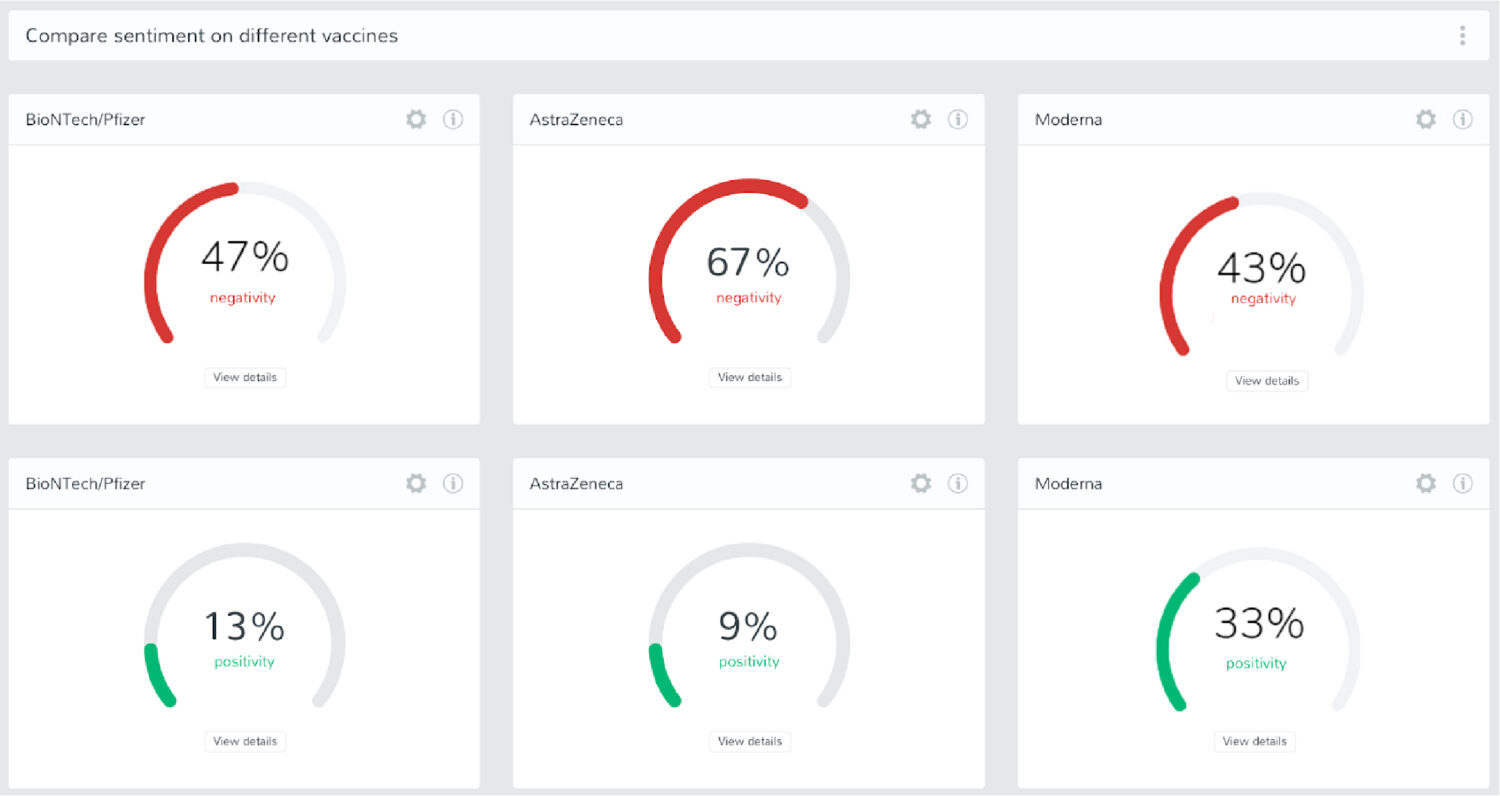 A massive train disruption was experienced by network operators in the Netherlands at the end of May. Due to a computer malfunction, the communication between major network operators ProRail and NS was disrupted. As a result, the entire Dutch railway was affected. Passengers could not travel to their destinations for an entire day. This caused a lot of public unrest, also on social media. PublicSonar detected live messages about the frustration of passengers, as well as the progress of the problem resolution. In this case, from all the negative emotions fear was the most common sub-sentiment. Fear was related to the uncertainties of not being able to reach home, especially in rural areas.

Do you want to know how you can monitor (sub-)sentiments in your area to enhance public safety & security? Just drop us an email at info@publicsonar.com, follow us at LinkedIn or join one of our free webinars.