The Netherlands experienced its first severe snowstorm in a decade. Authorities declared “code red”, as the entire country was hit by Storm Darcy last week, as reported by BBC. Extreme weather conditions were also present in neighbouring Germany. As a result, both countries experienced plummeting temperatures, disruptions in rail connections, traffic incidents, cancellations of flights and other disturbances.

As usual, citizens shared hundred-thousands messages on social media during this natural disaster. According to this study on the role of social media during storms, publicly available data has an impactful effect. The research found that social media platforms play a crucial role in spreading awareness and warnings. Moreover, Ulvi et al. recommend that “Public health professionals and emergency response teams should utilize social media.”

So, PublicSonar did an experiment to determine if there was valuable information online about Storm Darcy, by tracking social media. What did we find?

We established that people have multiple ways of expressing themselves. For example, when talking about extreme weather, people can be using different words to describe the situation. They can refer to a multitude of words including snowstorm, extreme wind, slippery roads, ice or freezing. Therefore, our search constituted over 300 different weather related words and expressions. The advantage of PublicSonar is that this does not have to be done manually, but with a single click. Wondering how you can easily search social media for relevant messages about disasters? Join our webinar on 3 February and learn from even more examples how to do so.

Over the course of a week, we collected publicly available information about Storm Darcy.  The outcome was over 120 thousand messages about the storm, snowfall, ice, and extreme weather. The scope of the search includes the Netherlands only. Citizens shared opinions, pictures, videos and locations. The result is an enormous information overload. It is manually impossible to sift through this abundance of data.

To sift through the 120 thousand messages, we identified topics of interest including (but not limited to) dangerous situations, mobility issues, calamities and emergency reports. This resulted in only 9 thousand messages around (potential) incidents. The significantly smaller dataset permits real-time machine learning analysis on the basis of locations, severity and sentiment. Our goal was to pinpoint information that can support emergency services, so we used our AI-technology for analysis. Taking into account that accessibility was limited in the country, publicly available information is a great source for situational awareness.

Cutting through the noise

Of course, not everyone on social media reports an incident. A snowstorm for some is a lovely day in the snow for many. Families and friends shared precious moments with loved ones on social networks, captured in pictures and videos. 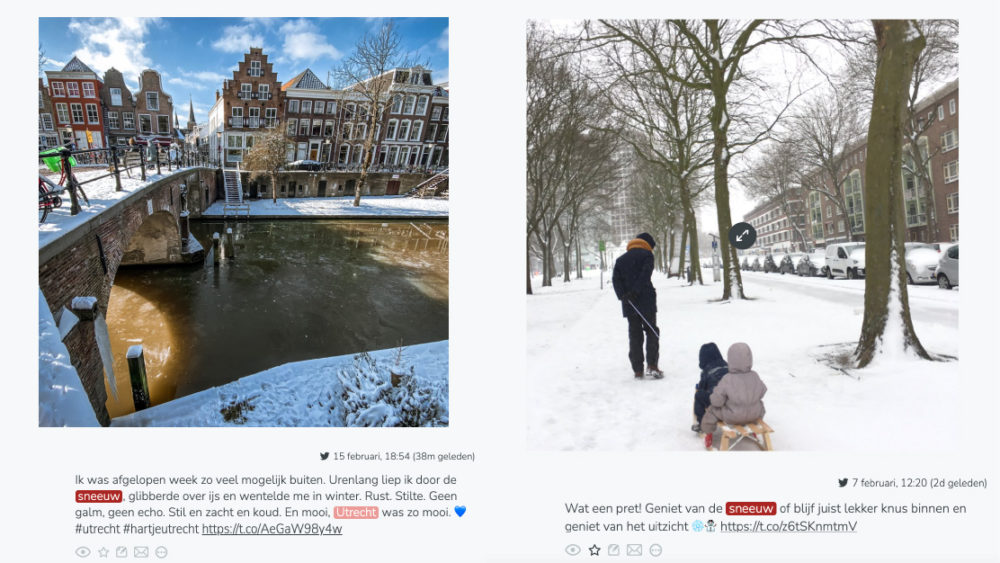 Prior to zooming in on topics of interest, we could see many similar messages. A great example of “noise”, as the aim of our exploration was finding citizen reports on disturbances. Zooming in gave us valuable information about road accidents, abandoned trash, citizens reporting heavily snowed streets and warning others to keep an eye on iced roofs. 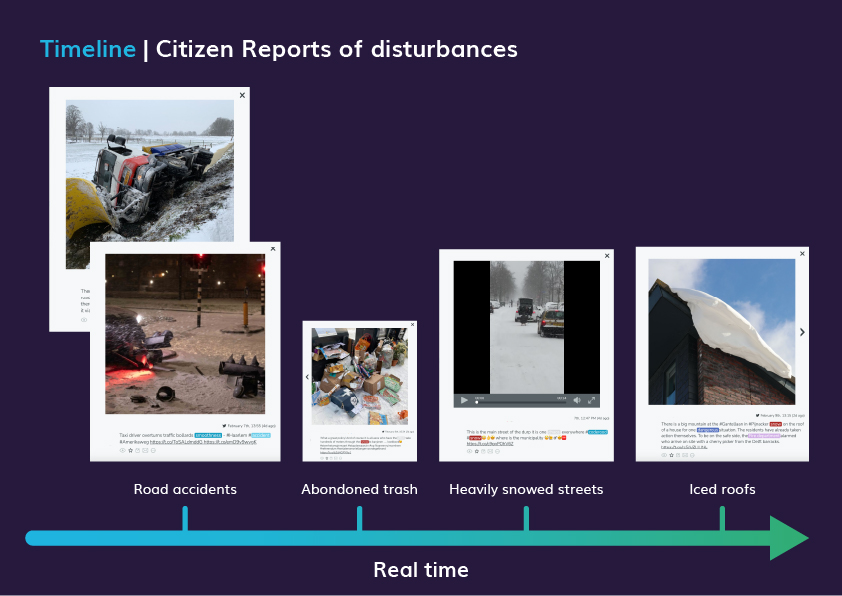 From information to action

Citizen reports during storms and natural disasters can be of particular value to emergency responders. Are you curious to know how to get the earliest alerts about disturbances in your region? Do you want to know how tracking social media can be turned into actionable insights? And do you want to hear about recent practical applications of our technology? Contact us at info@publicsonar.com or go to our contact page.